The Importance of a Christian Education

Why K-12 Christian Schools are Worthy of Our Support

While about 60-70%1 of formerly church-going teens are no longer going to church in their twenties, the trend is not true for adults with at least four years of K-12 Protestant schools:

The 2012 Cardus Education Survey is the largest longitudinal studies of outcomes based on public, Protestant Christian, Catholic, and home school results ever conducted. Chief author of the study was David Swikkik, Chairman of the Department of Sociology at Notre Dame. Research from Ed Stetzer concurred with this finding, and concluded the Christian schooling during high school was most efficacious. In our nascent research on alumni through the Parent Satisfaction and Referral survey, GraceWorks is finding similar results. 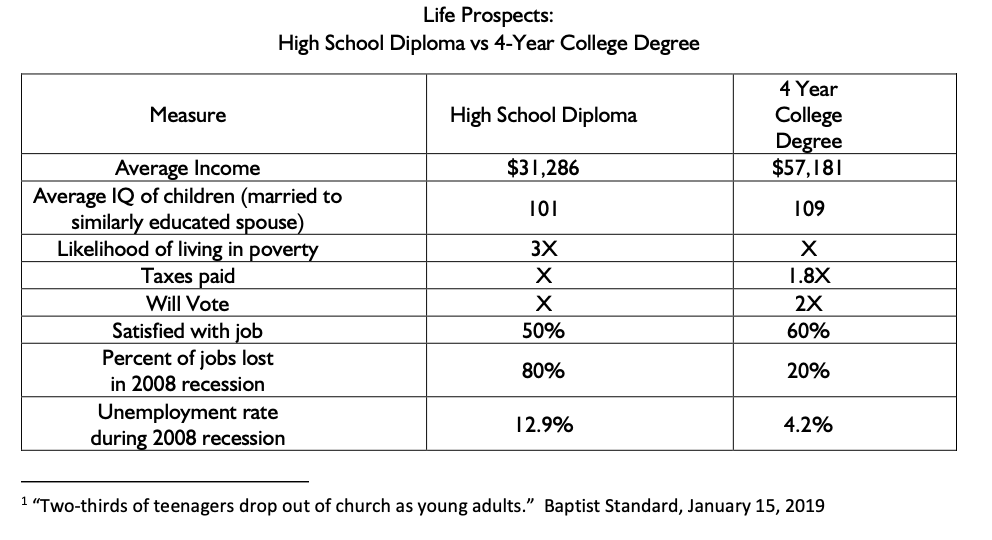 For the far majority of young people, a four-year college degree is essential for success at life. Yet today in the United States, over 40% will drop out of college before completion, often saddled with significant student loans, but no better life prospects.

In 2014, a major 10-year longitudinal study of over 15,000 high school sophomores by the U.S. Department of Education (N=15,000+) found that college graduation rates for Protestant and Catholic schoolers was about twice that of sophomores in public school:

Thus, Protestant and Catholic schooled young people are about twice as likely to graduate college, with far better life prospects. Not even homeschoolers will graduate college at this high rate.

#3: The Opportunity of a K-12 Christian Education

In other words, if you care about opportunity in America, get kids into Christian schools! This is a surprisingly settled issue in the research. Bill Jeynes has conducted two major meta-analyses on this topic. A meta-analysis is a “study of studies” meant to settle issues in social science. Jeynes two meta- analyses involved every relevant peer reviewed journal article for the last 30 years – about 220 studies altogether. Here’s the two most important findings:

While 10 to 33% of students at the average charter school would otherwise be enrolled in a private school, the national data on charter schools shows results very similar to public schools. For example, the CREDO National Charter School Study, based on a 95% sample of all charter school students in 2012, detailed reading and math differences:

Certainly America has a significant opportunity problem. And considering all that Jesus did to elevate the status of women in 1st century Palestine – God cares. Christian K-12 are arguably one of the greatest forces for equal opportunity in the 21st century.

Line of Evidence #1: What we know about Christian school character results

The 2012 and 2014 Cardus studies are particularly instructive on Christian school character outcomes, because current behavior was compared to schooling 15-20 years earlier. In addition, the group studied were active in church as children and teenagers. Comparing the actual behaviors of over 1500 adults 15- 20 years later, compared to all other types, adults who were educated at least four years in a Protestant K-12 school were …

… more philanthropic, giving on average $1500 a more to the churches they support

… much less likely to have pre-marital sex, or get divorced,

… reading their bible and praying far more, respecting the infallibility of the Bible and the authority of the church,

… uniquely optimistic about their future,
… more likely to pursue jobs that fulfill a religious calling, … leaders and pillars in their congregation.

Even as our communities unravel, K-12 protestant educated adults were “community stabilizers” according to the 2012 Cardus study. In terms of social capital, the 2014 study noted that:

SOCIAL CAPITAL DEVELOPMENT. The close-knit nature of private school communities and the strength of relationships between students and teachers suggest private schools are adept at fostering social capital. Graduates feel prepared for relationships. And in fact enjoy close ties with individuals who are different from themselves in significant ways, including close friends who differ in belief and race/ ethnicity. The social capital built within private schools does not appear to exclude bridges across social differences.

William Jeynes of Cal State, Long Beach, has conducted a number of meta-analysis studies of Christian school outcomes. These “studies of studies” conclude that students attending both Evangelical and Catholic schools were:

Line of Evidence #2: What we know about American society when public schools became godless.

For 350 years, character education was central in all levels of Christian education in the United States. This changed in 1962 & 1963, at the apex of the United States economic and spiritual dominance, with three Supreme Court decisions that forbade bible reading, prayer, and discussion of God in the classroom. From then to the year 2000, the United States …

… Doubled the divorce rate,
… Tripled the teen suicide rate,
… Quadrupled the rate of reported violent crime,
… Quintupled the prison population,
… Sextupled the percent of babies born to unmarried parents, … Increased, by sevenfold, our cohabitation rates, and ….. is 10 times more depressed than before WWII

About half of young people have had their first sexual experience by age ten.

As was widely reported, SAT scores declined seventeen years in a row, from 1963 to 1980, altogether 110 points on their 1600 point scale. In middle school, students are, on average, about 1.5 years from their peers in 1930 – with the average textbook also written at about two grade levels lower.

Line of Evidence #3: The Link Between College and Character

… Church attendance for young people in the bottom third of the socio-economic ladder is likewise dropping at twice the rate of that of the upper third.
In contrast to the view of many evangelicals that obtaining a higher education can be dangerous for their children, Putnam concludes:

“If you listen carefully, hymns in American houses of worship are increasingly sung in `upper class accents.” Robert Putnam

A number of authors have noted the significant character advantages of devout religious commitment. Here is Smith and Denton’s take for teenagers ages 13-17:12 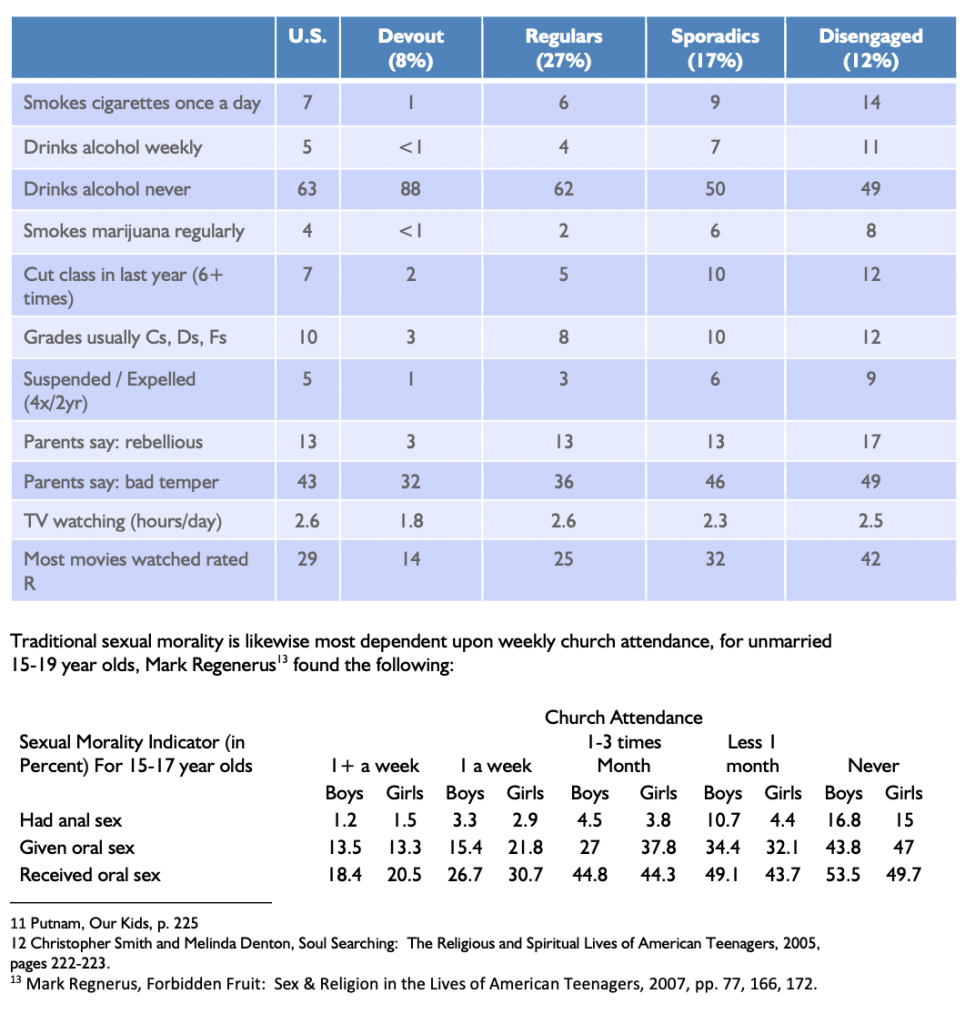 In short, if young people will continue to attend church, they are less likely to fall into sin. The bottom line is that attendees of Protestant K-12 school are attending church in their 20’s. For many Christian school parents, that is the ultimate in student safety!

Christian School Teachers: A Gift and a Blessing

What’s the difference when your child’s school teacher is mission and ministry-minded?

Here’s what parents say about their Christian school teachers:

“The Christian school teachers that I established a relationship with are very special to me. The fact that most of my teachers cared about me individually and spiritually was amazing.”

Christian school teachers not only teach facts and figures, but they also integrate God into all their subjects. Math displays the orderliness of God. Social Studies reveals God’s working in lives of people. In History, students can see God’s timing as well as the consequence of good and bad, wise and unwise behavior.

To Christian school educators, teaching is more than a vocation; it is a calling and a ministry. Christian school teachers view teaching as a gift from God to serve the body of Christ. These are the most mission- minded teachers in the country, who deeply value the importance of education for life and eternity. They also know that education is more than cramming students’ heads with facts and figures to pass a govern- ment mandated test.

Students also need to grow spiritually and develop godly character. Throughout the day, Christian school teachers incorporate within their instruction that which pleases God:

􏰁􏰁􏰁􏰁 to care about and respect others,
􏰁􏰁􏰁􏰁 to be kind and gentle,
􏰁􏰁􏰁􏰁 to practice patience and self-control, and
􏰁􏰁􏰁􏰁 to develop personal responsibility, joy and peace.

Christian schools have much to offer besides hiring outstanding teachers: